More musings on farming marginal land… we have a great deal of it. Below you will see a map of Southern Ontario’s soil capability.  The red/orange/yellow stuff is the good stuff, and you will notice it’s near absence in our area.  I remember having a discussion with a young gentleman, who grew up on a farm in the London area (big patch of red down there…) and casually derided and wrote off our region’s potential for agricultural productivity.  In many ways, he’s right: we will never be a true breadbasket, we will never be able to grow anything and everything, we will never be able to drop a plow into the ground, and just keep going… Nevertheless, that fact remains that I was personally offended by his comment. 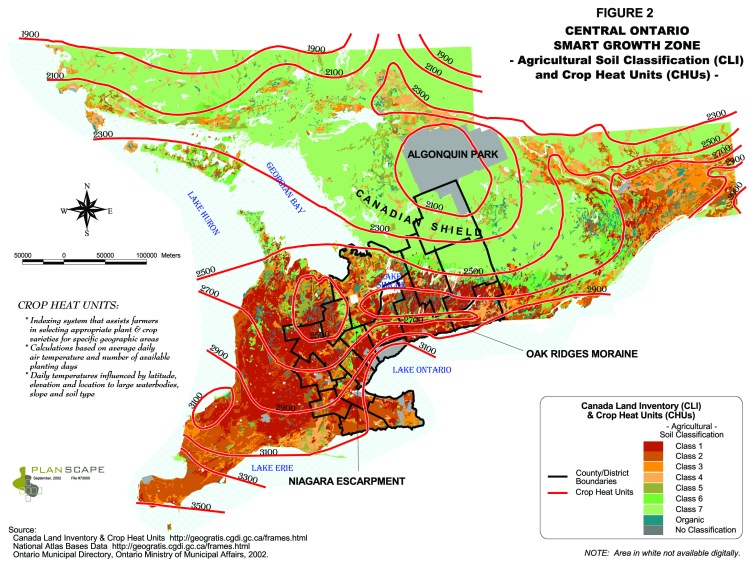 Sure, maybe the Lord did not blanket our region with a mantle of A1 farmland… but it doesn’t mean we can’t farm here!  The answer is intelligence, ingenuity, a bit of hard work, some capital expense, appropriate application and patience. It can be done, and has been done the world over.

I wanted to give a few examples here, and also talk about what we would like to achieve at Salt of the Earth. Because as I discuss dealing with marginal land, as much to psych myself up, I feel it is also of great interest to the general “eat local” movement in the Kingston area: if we really are going to “eat local”, bringing marginal land into sustainable, and economically viable production should be something about which we are well informed.

As discussed in Farming Marginal Land (Pt. I), at Salt of the Earth, we have the two typical extremes of the local landscape: heavy, marine deposited clay, and thinly soiled limestone lands. Respectively, we can look at these lands in terms of being tillable, and untillable.

The tillable land is in need of drainage and organic matter.  The untillable land, should it produce food, needs grass and trees.

Let’s start with the untillable land.  What is interesting about untillable land is not that it is barren: far from it, it naturally supports timber and grass, which supports a variety of wildlife, which can include edible flora and fauna.  Adjusting these factors in favour of our traditional agriculture can make for a very productive and beautiful landscape, ie: domestic ruminants can fill the same ecological niche as wild ungulates. 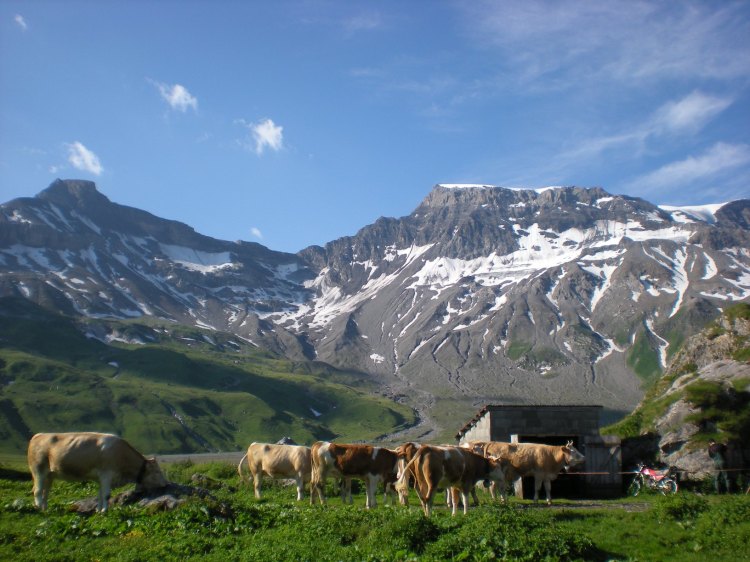 A great example of turning an untillable landscape into a lush agrarian region is found in the alpine regions of Europe: France, Switzerland, Austria, Scandinavia et al., where grazing has been carried out for hundreds of years on nearly sheer slopes, with very little soil, and a punishing climate.  The freshly glaciated earth is nutrient dense, and the cool, mountain climate produce abundant seasonal forage.   Cattle, sheep and goats are grazed, milked and fattened seasonally, and fed in winter with the stored forage from lowland meadows, which, while still marginal,  are at least level and rock free enough to harvest hay from.  The respective landscapes are dovetailed and utilized to their maximum potential.

Now, I use this only as an example: perhaps it is relevant to parts of Alberta and British Columbia.  In many ways, this agriculture was also traditionally carried out in parts of the Maritimes, like the Highlands of Cape Breton Island and other rough spots in Nova Scotia, like Antigonish and Guysborough Counties: landscapes which now uneconomically produce pulpwood and are in rapid decline…  Anyway, our region is relatively flat, but the problems are similar. 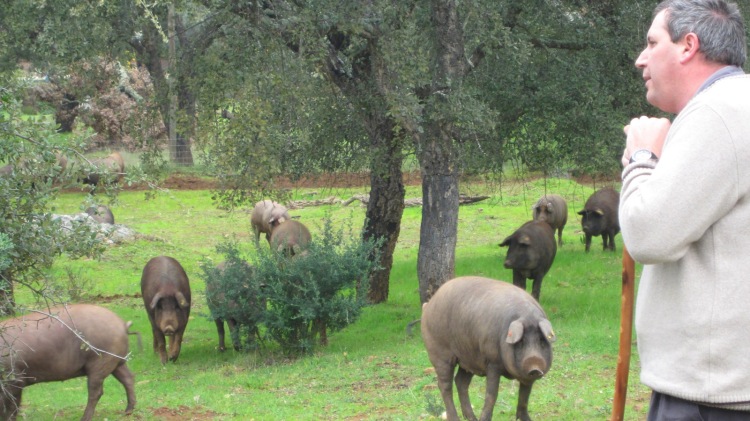 A Portuguese swineherd in an attractive and productive oak parkland.

Perhaps a more relevant example can be found in Portugal.  Another rocky, temperate place, the traditional solution to this landscape is found in the “cork and pork” forest, where swine and oak trees from a guild in a pairing that yields food and a valuable export commodity. 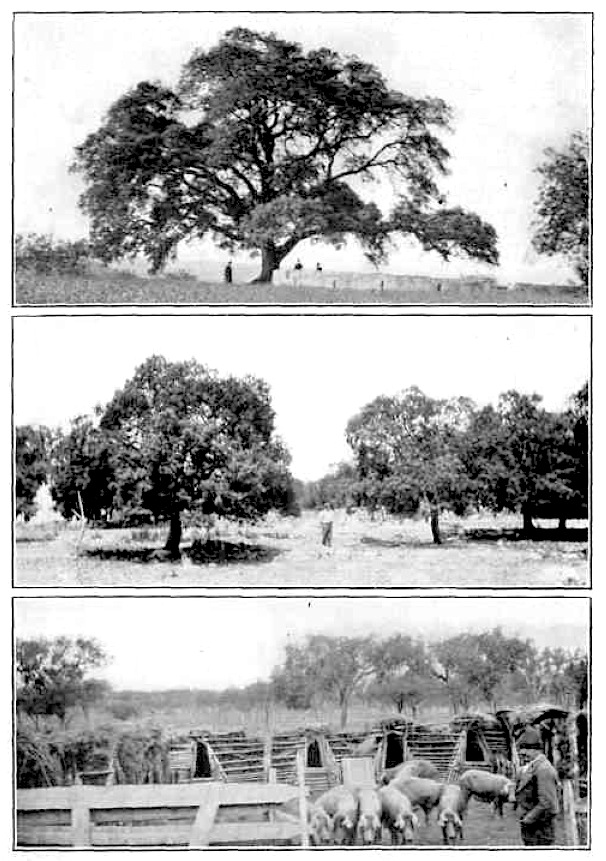 Swine feed on grass pasture and are fattened on the annual crop of acorns.  The oak trees are stripped every 7-10 years for their bark (cork), and trimmings, dead trees etc. were traditionally turned into charcoal.  It doesn’t have to be oak trees either (though you can’t harvest cork from anything else): this system was also traditionally carried out in association with chestnuts on the island of Corsica, and really throughout Europe, on the gleanings of field and orchard crops.  This system also carried over to North America, where the settlers turned their hogs loose in the autumn to feed on abundant amounts of forest “mast”: acorns, hickory and walnuts, chestnuts and beech nuts. 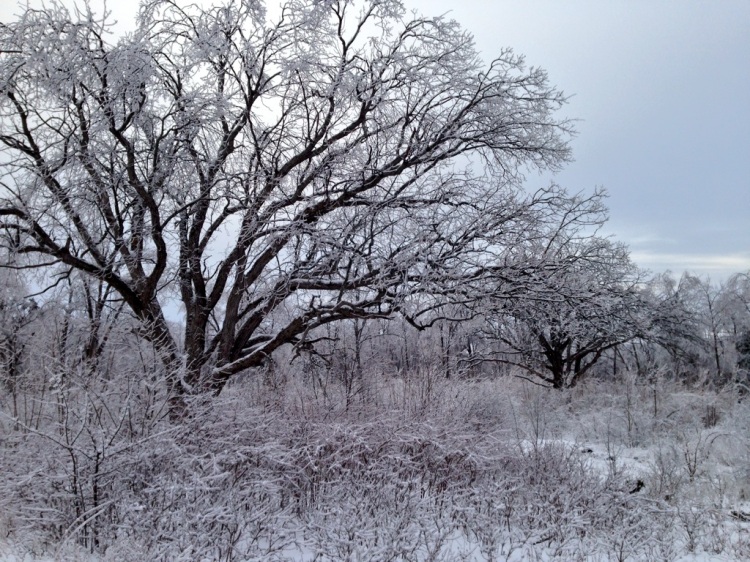 White oak and burr oak at Salt of the Earth, surrounded by brush.  A downside of urban farming is that you can’t really utilize fire to it’s true potential!

This model is particularly relevant to Salt of the Earth because our land is home to a relatively rare ecosystem in Ontario: Oak-Hickory Savanna.  Traditionally, this ecosystem was shaped by fire: First Nations “farmed” these areas by burning off the understory of grass and forbs: leaving an overstory of mature trees, which yielded both excellent grazing and nutmeat for the game they survived on.  Given the urban whiteman’s aversion to fire, as well as his invasive species, our Oak-Hickory Savanna does not really resemble its predecessor: buckthorn, grapes and dogwood now clog the formerly open woodland.  However, over the brush, remain impressive mature White, Burr and Chinquapin Oaks, Shagbark and Pignut Hickories, as well as the odd remaining Butternut tree (Butternuts are in severe decline).  It’s hard to say how many acres of this specific landscape we have at Salt of the Earth (I would guess about 20-40), but into the future, I would like to explore its potential as a productive model for agriculture on marginal land: replacing, through brushing and controlled grazing, the invasive shrubs with perennial forages.

Side note: for a really amazing example of great farming on marginal land, check out Walt Jeffries’ blog about his pig farm in Vermont: Sugar Mountain.  They are doing amazing things on land that had been given up on long ago, they’re even building a butcher shop! 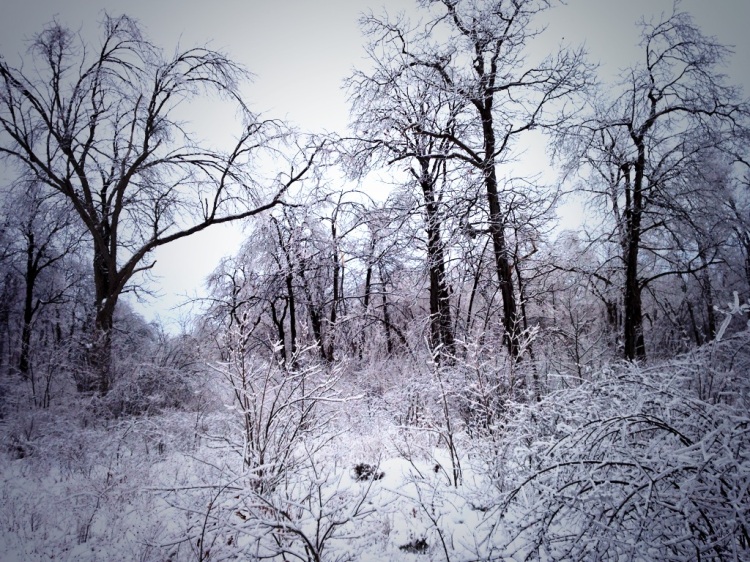 A burr oak, and shagbark hickories: wouldn’t it be nice to see multi-species grazing happening under those trees?

Trees do remarkably well on the thin limestone soils and breaks of boulder till at our farm.  Their roots penetrate fissures and crevices, going deep for nutrients and water.  As well as the Oak-Hickory stands, we also have a large sugarbush, with hundreds and hundreds of giant sugar maples, many capable of supporting 2-3 taps per tree.  Interspersed with the climax maples are abundant ironwoods: great fuel for an evaporator. Along with maple syrup, another edible forest product we are investing in is shiitake mushrooms.  These are raised on hardwood logs (in the 4-8″ diameter range), and do best under the moist canopy of a hardwood forest.  The 750 logs we are harvesting now will be inoculated this spring, and begin bearing when the weather warms up in 2015.  The beauty of shiitakes is that the substrate (the wood) is extremely abundant on our farm, and produced as a by-product of sustainable forest management. 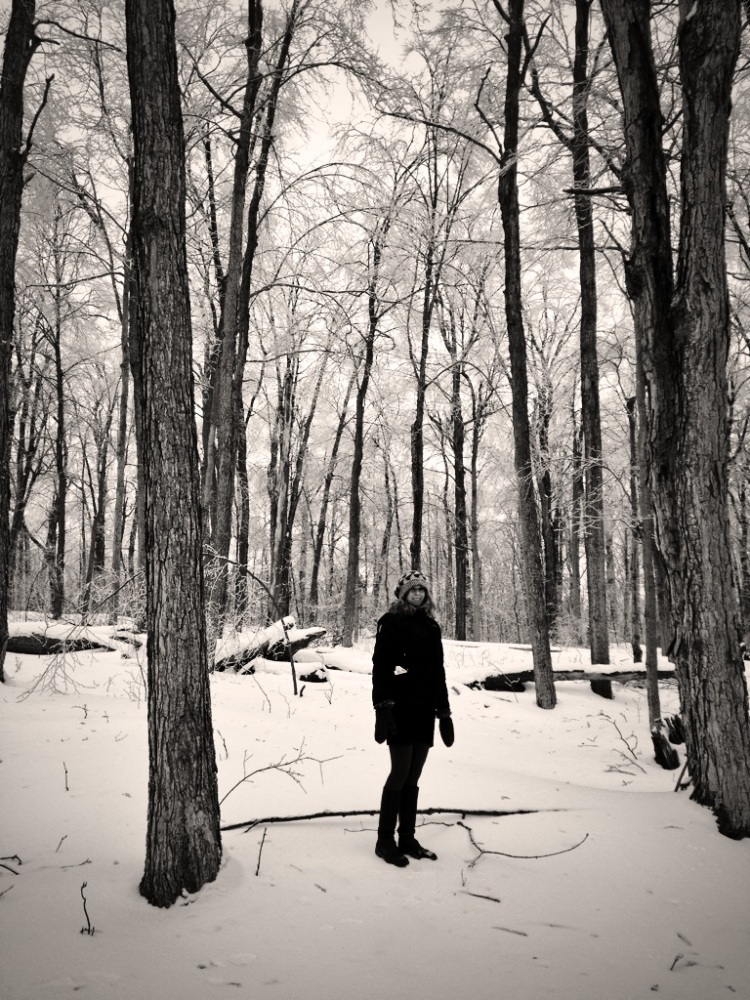 Morgan out for a stroll in the sugar bush. We will start tapping in Spring of 2015.

Trees and grassland are amazing solar collectors: that’s photosynthesis for ya.  It’s definitely prettier than a field of panels… and the yields are more diverse: energy (firewood, grass pellets), furniture and building materials, sugar (maple), fungi (wild and cultivated), nuts (though you will probably never develop a taste for acorns), natural fibre (wool etc.) and of course (my favourite): meat and milk.  Utilizing marginal land for food production (especially meat and milk) turns the whole “diet for a small planet” vegetarian argument on its head.   Yes, using prime farmland to grow continuous corn and raise feedlot beef in a world of 7 billion and counting doesn’t really make a lot of sense – but that’s not beef’s fault!  On the contrary, using prime farmland primarily for human food -with forages as part of a healthy crop rotation- and putting marginal farmland to work as pasture and sustainable forestry is probably the healthiest way we could move toward a world where everyone gets to eat. 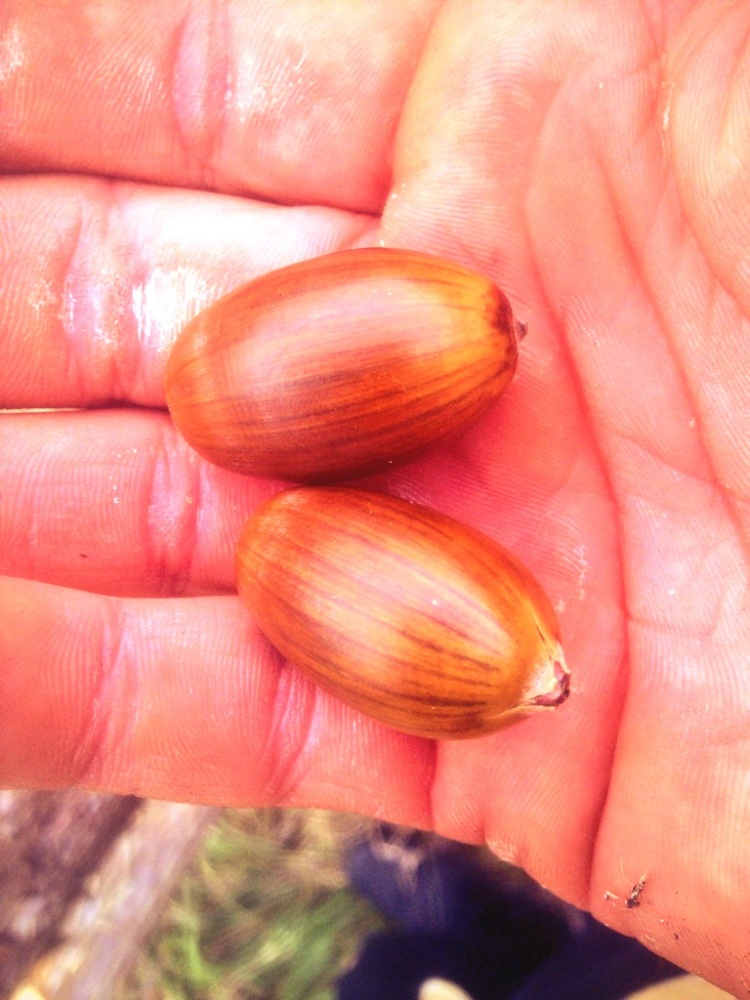 Unblemished acorns from an English Oak in Portsmouth. I ate them unroasted: mildly sweet, with zero bitterness. I’m sure pigs would enjoy them more, though.

Prime farmland is the exception on the surface of planet earth. It’s a precious gift, and one we ought to steward with the utmost care and long term outlook (not that I have any say in the matter, though Morgan, as a planner with the provincial government does…).  Most of the rest of the planet is too steep, too dry, too hot, too wet, too thin, too cold, too something to produce the crops that we like to live off of: a great deal of that “too” land will produce grass, and even trees.  Turning that grass and the fruit of those trees into meat and milk is a way to increase overall productivity, liberate arable land for human food, as well as provide the healthful (and delicious) animal products that make life worth living (met any happy vegans lately?).

Anyway, that’s enough of me for now…  It’s cold as anything out there, and I’ve got CSA promo stuff to work on.  Thanks for reading!

What do you say? Cancel reply

613-331-1078
farm@saltofkingston.com
We operate two farmstands at:
1054 Hwy 2 East, Kingston
357 Sweet's Corners Road, Lyndhurst
Our farmstands will be opening for the 2022 Season shortly!
Loading Comments...
%d bloggers like this: